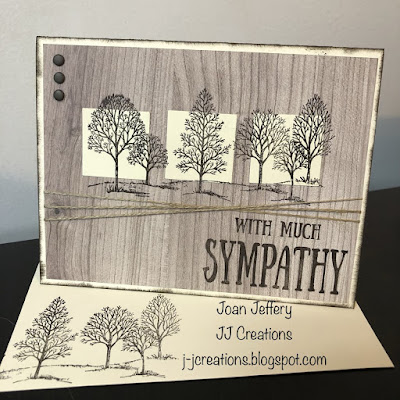 It's an unfortunate but true fact that I have had to send quite a few Sympathy cards through this past year.  I guess I've gotten to the age where my friend's parents are passing away, or something suddenly has happened to a friend themselves.  Yesterday, my husband and I attended the funeral for the father of a former colleague his.  I had made up some sympathy cards to have on hand - BUT - nothing that would be appropriate to give to a man.  I got the idea for this card from one created by  Donna Kish.
I "cased" Donna's card by changing the background to a piece from the Wood Textures DSP.  She had the idea of stamping the Lovely as a Tree trees over top of some little squares so that the trees got stamped off the edges.  I really liked the look of it.  I used Linen Thread instead of Baker's Twine and some old Naturals Dots.  The sentiment is from an old Paper Pumpkin.  You could certainly substitute some of our current sympathy sentiments and the dots were just an addition - not really necessary.
Here is Donna's card... 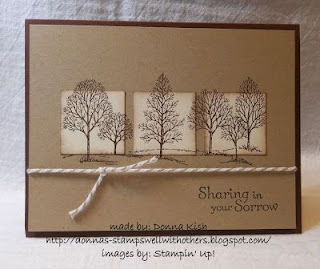 Don't be afraid to take someone's idea and make it your own.  It's a compliment to their creation that you want to copy it and changing bits and pieces of it makes it your own creation.

I have decided that sometime in April I will be holding an "Unfortunate, but Necessary" card stack which will feature Sympathy and Get Well Cards.  Stay tuned for that.

For now, thanks for visiting,
Joan 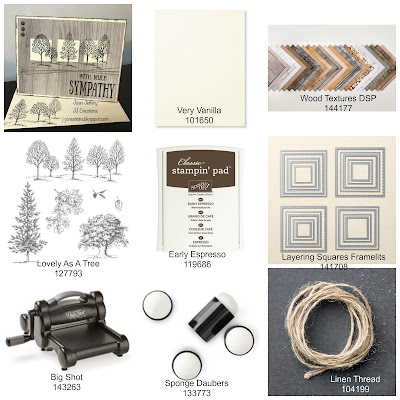 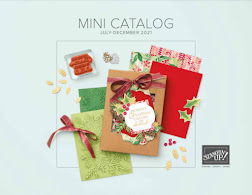 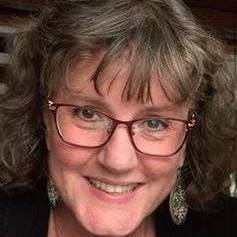 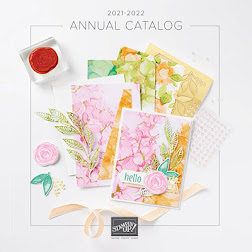